This is probably one of the coolest, most random things, that has ever happened to me. A few weeks ago, a location scout paid a visit to our office. Instead of being instantly turned away, our HR Manager who sits near the entrance called me over. The guy explained they were in the area looking for spaces for upcoming commercials. They wanted something modern, bright and open. All they needed was our space and we would get a check for our time. She figured I would be very interested since I handled our corporate office decorating, which of course I was. I eagerly escorted him around the office, never expecting to be in the running. Our office space is nice, and I’ve made some great strides in it, but is it not professionally done. It is a DIY interior design by Directions Not Included! I

Crazy enough, a week later I got the call that we were the location they wanted. A whirlwind of a week later, everything was set and the commercial was ready to be filmed. What a production! There were over 50 people in terms of production crew, caterers, the clients, the art team, and the talent, inside and outside the building. Trucks, cars, large food truck, you name it, it was here.

Here are a few shots from the day. All iPhone pics because I was I was so sleepy  I forgot my camera. I was in the office bright and early at 7:30 am on a Saturday to supervise. Mama Hen at her finest, making sure these strangers didn’t ruin our space so the sleepiness was justified. 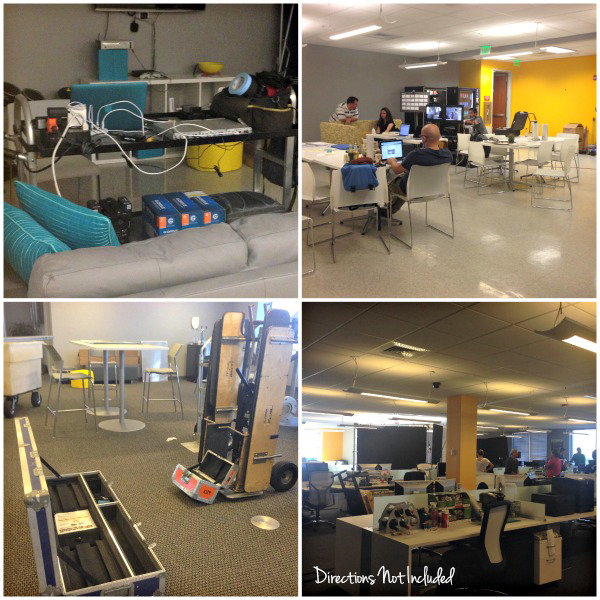 Clockwise – The view I had from my office while they were filming directly in front of it, more equipment and people, the screens set up for an interview portion of the commercial and even more equipment.

This was one of my favorite things to watch. While the cameras were filming in the office, our lunchroom was used by the producers and clients to watch it all unfold. Seeing the HD footage of the office space I’ve been decorating for over a year was so cool. Do you see the story board on the left? All the details were just amazing to see unfold. 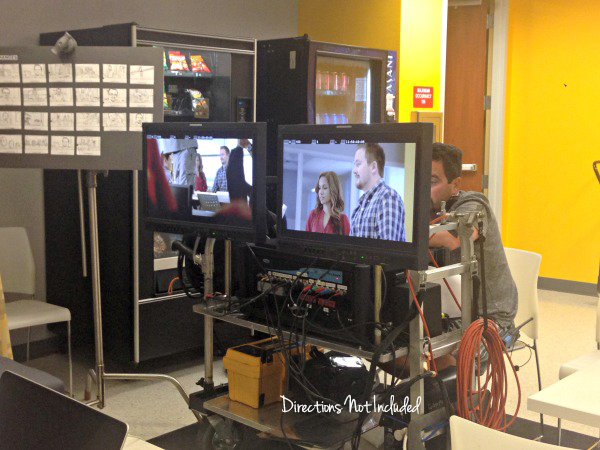 Here is a pic of “the talent” as they were called on set.  Pete is one of our very own and the only one from my team who signed up to be an extra. He was so psyched to be in a commercial. Techy by day, actor on the side. I see a budding career for our dear friend 😉 All kidding aside, these people were all on set from 7:30am until 9:30pm. That is one hell of a long day to be “on”.  The production crew resorted to raiding our Nerf guns and Cards Against Humanity set to keep themselves entertained.

All in all, it was an amazing experience. They loved our space, it was cool to watch, and I was honestly very proud afterwards. We had another scout come out during the shoot and inquire about the office being used regularly for Spanish telenovela. As tempting as it is, not sure if it would fly, but I sure was flattered.