I’m going to admit my geekiness here. I’m a Harry Potter fan. A new fan. I can’t say I’ve been following the book or movies since the beginning. On the contrary, I made fun of my best friend, S, on her Harry Potter addiction. We went to happy hour on the night of the midnight release of movie number 7 and I waited with her for a bit in line at the movie theater. All I could do was laugh at the people dressed up waiting for the movie and laugh at her for her Gryffindor tie. Seriously? It is a kid’s book about wizards!
Then she made me read the first book last November and before you know it I had devoured the second one. I finished the book series in April along with all the movies and slowly but surely have fallen in love. I’m still not as crazy as S 😉 (who by the way, is going all out with a Harry Potter themed party tonight) but I may or may not be wearing this Always t-shirt tonight and have my Ginny Weasly wand in hand for the movie. 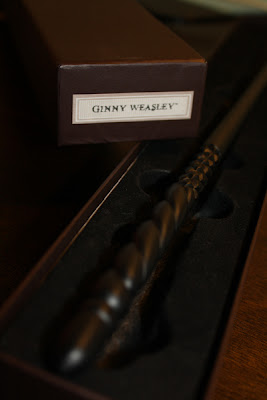 Since my costume for tonight is Ginny Weasly, I found it appropriate to get a little crafty and make a Pygmy Puff. They are available for sale at Universal Studios and look like this for all you non-HP fans:
Since the hubs would have seriously given me the side-eye for spending $15 plus shipping for this I had to improvise and make something myself. Off to Joann and Michaels I went and I came back with this stash – hot pink feather boa, Sculpey oven hardening clay (much to the dismay of my potter husband), googly eyes and styrofoam balls. 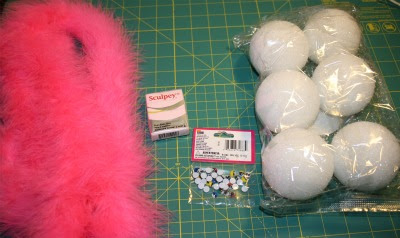 I used a couple of quilting pins to hold down the edge of the boa and started wrapping it around the ball.  I secured the boa through the string middle along various parts of the styrofoam ball to hold it down so it would not unravel. This is not a child safe toy! Since all the individuals in attendance of the Harry Potter party are of drinking age (and the majority in the over 30 set…did I just admit that?), I figured it was okay to go for simplicity instead of child safety. A glue gun would be a great alternative for anyone considering this for kiddos.
Then over some wine and girl talk with S, I sculpted the face out of light pink Sculpey. I put it in the oven for 15 minutes and out came a hardened Pygmy Puff head. Glued on some googly eyes with beautiful lashes and then attached the head to the body. There you have it – my very own Pygmy Puff. 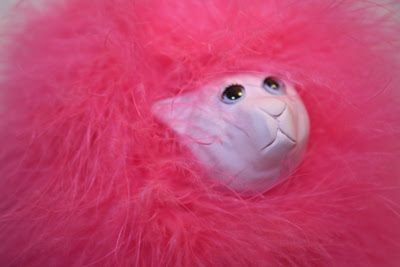 Now I’m off to get my Harry Potter on at the party and midnight release of the final movie. Laugh at me if you must but if you haven’t read the books, pick them up. They have an addicting story with endearing characters. We’ve even convinced my hubby to start reading them.
Thanks for following Directions Not Included!