Can you imagine trying to throw a pirate themed party for a 5-year-old the week between Christmas and New Years? We have friends who have a little one born on Christmas Day and that is exactly what they did. Given the holiday insanity, mom was running behind on decorations so I offered to make some quick things to pull the theme together.

Unfortunately, the day of the party the wind was so strong we couldn’t actually display anything without it all ending up flying into the ocean. I apologize for the iPhone photos and the setup. They were just quick shots before twenty something 5-year-olds devoured the cupcakes. You can’t come between kids and cupcakes 😉

I made three types of cupcake toppers. Simple 2.5 inch circles cut out on red and white striped paper as the base and then embellished them with cutouts from the Silhouette. I alternated skulls and cross bones at request of the birthday girl who wanted “to scare people with the skeletons”, number 5s and pirate ships just like the one we went on.

I made a little banner that we could sadly only have up for a few minutes due to the wind.

And here is a few of the cupcakes with the assortment of pirate themed party toppers. All jammed into the box from the bakery before being quickly inhaled by hungry kids. 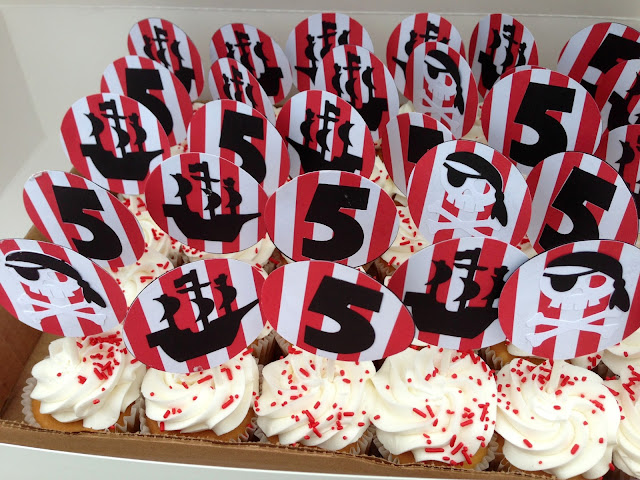 I’m happy that they were a total hit. Some of the kids thought they were lollipops and were quite disappointed when they licked them 😉
What was your favorite party as a kid? Or what was the favorite one you’ve thrown for your kids?